The librarian of a museum library wants to know whether the results from his museum’s most recent catalogue of paintings have already been incorporated into the MeMO database. Using Full text search he enters the title and sees that the catalogue is not yet mentioned in the descriptions of the objects from his museum. He subsequently notifies the MeMO project that the new catalogue has been published by completing the Add extra information form that can be clicked for each record describing an object from his museum. In this form a number of fields have already been completed, including the MeMO ID, the name and – if known – the original and holding institutions.

Search for biographies of people mentioned by name

Among the narrative sources there are a number of descriptions of lives of important persons, including big names within the Modern Devotion, such as Johannes Brinkerink and Geert Grote. These biographies can be searched using Full text search by entering the names of these persons. 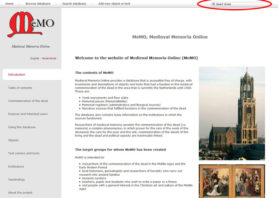 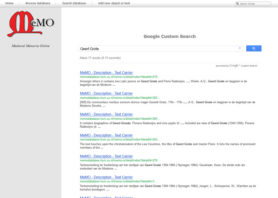 Floor slabs and tomb monuments appear to have been an eminently suited medium for people to express their status. For instance, who were these people who were buried under slabs and monuments with (cadaver)effigies of the deceased, and whose graves were decorated with brasses? Can certain patterns be established?

Full text search is the best option to find the suitable materials for an investigation into these matters. 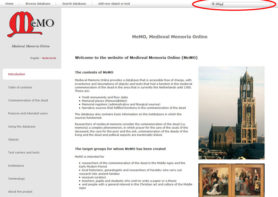 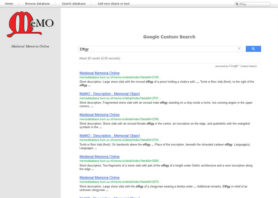 2. Brasses:
Brasses are engraved plates made of copper alloy. They can be large plates with a life-size effigy of the deceased, for example, but also much smaller plates with the heraldry of the deceased or decorations like the symbols of the four evangelists. Antiquarian drawings and manuscripts such as that of the Utrecht historian Arnoldus Buchelius (1565-1641) show that this type of tomb cover existed in large numbers in the Netherlands. A relatively small number has survived, however. In a number of cases the metal rivets remain with which they were affixed to the stone. Also the indents are still visible. Whether indents indeed indicate the former presence of brasses needs to be established through research of each case, because they may also indicate the presence of heraldry in stone, which were chopped off during the French Revolution. Due to its motto of Liberty, Equality, Fraternity, heraldry and other references to a person’s status were considered undesired decorations. 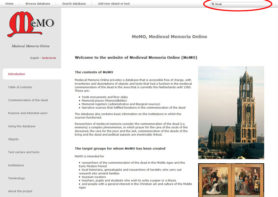 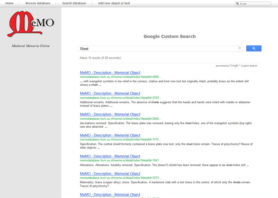