The Memorial objects section contains inventories and descriptions of: 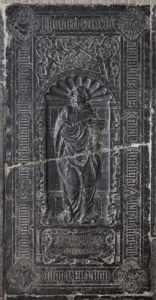 Floor slab with the effigy of parish priest Keimpe van Hottinga († 1535) in Nijland, Friesland. For many Frisian slabs the artist is known (in this case Gerbren the Sculptor), see MeMO memorial object ID 233

Included in the database are descriptions of objects that have survived (at least partially) and that certainly or very probably originate from the medieval institutions that were located in the area that is currently the Netherlands. Also included are objects of which there exist photographs and modern descriptions but whose current location is unknown. Not included are descriptions and drawings of objects in medieval and sixteenth-century archival records such as estate inventories, and manuscripts by historians such as Arnoldus Buchelius (1565-1641). 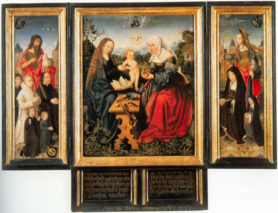 Triptych with the devotional portraits of the Van Beesd family from Delft (ca. 1510). Originally only the married couple was mentioned on the text panel. The name of their son Dirk, a Carthusian, was added after his death. The memorial piece was located in the Charterhouse near Delft, see MeMO memorial object ID 504

The point of departure for the descriptions is the entire object, because the combination of different types of data can indicate the functioning of the object and its usage. Besides information on the image and the decoration, the database also includes fields that describe materials and any alterations to the object. Many objects have been physically altered over the course of time. For example, a large part of the texts belonging to the memorial pieces have been lost. Memorial sculptures, tomb monuments and floor slabs have often lost their original polychromy. Such matters may have important consequences for tracing the usage and functions of the objects.