7. About the MeMO project

7.1 A short history of the MeMO project

The Medieval Memoria Online project was created on the basis of four important cataloguing projects from the 1990s and 2000s:

The first two projects prompted the launch of the MeMO project, as the initiator of the MeMO project, Truus van Bueren, was directly involved in these projects. In the early nineties Contactgroep Signum initiated an inventory of medieval memorial registers from the area of the present-day Netherlands. From January 2004 onwards, this inventory project was continued by the Werkgroep Memorieboeken (project group Memorial Registers) with the participation of researchers from the universities of Leiden, Utrecht and VU Amsterdam. The inventory was extended, and descriptions were subsequently made of the registers in collaboration with a number of members of Signum. 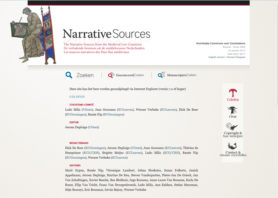 In 1996, the research project The functions of art, ritual and text in medieval memoria (i.e. the Memoria project) had been begun at Utrecht University, supervised by Truus van Bueren. It produced an inventory of memorial pieces in the (Arch)diocese Utrecht, and subsequently the exhibition and publication Leven na de dood (Life after Death) (Museum Catharijneconvent Utrecht, 1999/2000). The data from the inventory were used in the database and website Representations of Medieval Memoria (Memoria in Beeld), created between 2007-2009.

The Investment Grant NWO Medium aims to strengthen the research infrastructure of the humanities. This subsidy, granted by the Netherlands Organisation for Scientific Research (NWO) enabled MeMO to make a large number of sources accessible for the research of the commemoration of the dead, through descriptions and photographs.

The grant application was a collaboration between the three participating universities and a number of (heritage) institutions. A conscious choice was made for types of sources for which there already were inventories: memorial pieces, tomb monuments and floor slabs, memorial registers and narrative sources that provide information on memoria, or had a function in memoria. For the narrative sources the project group Narrative Sources (Groningen and Ghent) were contacted, which had set up the online Narrative Sources database (NaSo) with grants from NWO and the Research Foundation – Flanders (FWO), among others. The Cultural Heritage Agency of the Netherlands (RCE) was approached for their inventory of tomb monuments and floor slabs. The Monasticon Trajectense project of VU Amsterdam was contacted for collaboration – they compiled two online repertories: Monasticon Trajectense and Kloosterlijst.

The institutions that agreed to cooperate are: the Foundation for Ecclesiastical Art and Artefacts Netherlands (SKKN, since 2013 the department for Cultural Heritage in Churches and Convents of Museum Catharijneconvent in Utrecht), the Center for Family History (CBG) in The Hague, the Netherlands Institute for Art History (RKD) in the Hague and the Cultural Heritage Agency of the Netherlands (RCE) in Amersfoort. These institutions made photographs, information and expertise available to MeMO. The RCE moreover granted a subsidy for the production of photographs by a professional photographer. The CBG had the descriptions of the heraldry made by a staff member at a reduced fee.

The subsidy was granted by NWO in February 2009. The project team started work the following May in Amsterdam, Groningen, The Hague and Utrecht, with Utrecht as the lead project partner.

The MeMO project was achieved not only through the contributions and support of the participating universities, the heritage institutions, DANS and NWO. A number of churches, private persons and companies have also made research data and photographic materials available. Moreover the project received substantial subsidies from the Stichting Professor Van Winter Fonds and from the K.F. Hein Fonds. Museum Catharijneconvent in Utrecht repeatedly made its photos available for publications for the newsletter MMR and for the introduction to the database. The museum also made a financial contribution for the concluding MeMO congress (30 January – 2 February 2013).

The implementation of the database

The following steps were taken in order to develop the end user application:

Note that MeMO DS is generally well suited for projects which aim to inventory the use and functions of memorial objects, text carriers and texts.

MeMO DS was taken as the starting point for the development of a data model. This model formed the basis for the creation of the Database system. The database system comprises three sections:

Note that these overviews were last updated on: February 2011.