Counting as a way to prepare for research

The database is a suitable tool for collecting quantitative data. These may involve simple counts. How many registers with donations from parish churches are known and have been described, and how many from monasteries? How many manuscripts with short biographies of conventuals are currently kept abroad? 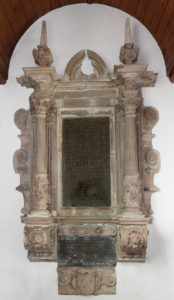 This type of questions can be decisive in launching a new research. For instance, the large number of Latin and Dutch inscriptions on floor slabs and other monuments in the MeMO database turn out to be eminently suited for a comparative analysis (fig. 9). The transcriptions of the epitaphs in the manuscripts of the Utrecht historian Arnoldus Buchelius (1565-1641) may also be included in this investigation, which allows researchers to work with even larger numbers. For instance, a researcher can determine

Case studies and the broader perspective

Quantitative research can also be used to place a case study in a broader perspective and to find out whether this case study is representative or unusual. Counting memorial paintings and sculptures with prayer portraits will show for example that in one respect the triptych with the Last Judgment of Anna van Noordwijk is a normal, regular representation (fig. 10). Anna’s husband and their sons are shown on the left wing; Anna and their daughter are placed on the right wing. On the centre panel Anna’s grandparents kneel to the left and her parents kneel to the right, with the wives behind their husbands. 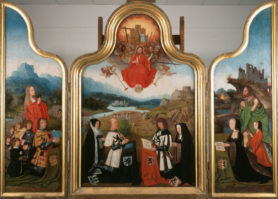 Fig. 10. Triptych with the Last Judgment and the devotional portraits of Anna van Noordwijk, her grandparents, parents, husband and children. It shows the two standard configurations for men and women, with women in the more modest place in relation to the religious image, see MeMO memorial object ID 718

This means that the men are consistently shown in the most important spot, according to the two standard configurations for memorial images in the area that is now the Netherlands: either the men kneel to the right of the religious image (i.e. to the left as seen by the spectator) and the women to its left (i.e. to the left as seen by the spectator), or the women kneel behind their husbands. Research has shown that since these patterns were strictly adhered to, deviations from the patterns show that the commissioner apparently intended to convey a special message about the people who are commemorated. Also, it has been demonstrated that the configuration in paintings that portray multiple married couples clearly indicates which persons are married to whom.

The triptych with the Last Judgment does not show any deviations in the configurations of the men and women, but it is unusual in another respect. The coats of arms indicate that the Van Noordwijk family, the lineage from which the woman stems, is the focal point. And this seems to have been unusual: we know of no other memorial image whose commemorated persons have been identified in which the deceased ancestors of the woman of a married couple are commemorated, and of which that wife was the patron.

For it is almost certain that Anna van Noordwijk had the triptych made. The painting shows the portraits of her ancestors, and it is dated about 1512 on stylistic grounds. It is quite possible that it was made shortly after the death of Anna’s husband in the same year.

In the literature it is often assumed without any arguments that it were the men who were the patrons of donations and foundations. After studying the written sources concerning memoria, however, various researchers have determined that it may be presumed that women played a large part as patrons. Extensive investigations into the roles of men and women as patrons in gift-giving and foundation practices would be very welcome (see also 3.5).

Memorial pieces that show more than two generations are rare in any case. In our database, which contains over 450 memorial paintings and sculptures, there are currently about fifteen representations of (members of) three or four generations. The majority of the other artworks show either a single person, a married couple or a family.

Another aspect is special as well: the painting shows the Last Judgment, but the Virgin Mary and Saint John the Baptist are not shown in their usual places in heaven on either side of the Judging Christ, but instead behind the portraits on the wings. These saints, who are normally represented in an image of the Last Judgment, are shown here as the patron saints of the portrayed persons.