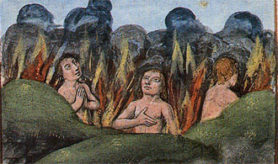 By living as a good Christian here on earth, which might include making donations to the poor, one could shorten one’s stay in purgatory and enter heaven earlier, also because the recipients of the benefices committed to prayers for the souls of the generous donors. Donations, foundations and other good works were also manners in which one could show with which communities one felt associated; also donors could express their socio-political viewpoints. Memoria, then, offered medieval Christians a way to express one’s identity. 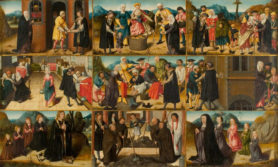 Memorial painting with scenes representing the Acts of Mercy, accompanied by the devotional portraits of a family, see MeMO memorial object ID 581

Besides case studies, broad quantitative and qualitative research is also essential for memoria research, because it allows us to distinguish between what was common practice and what was unusual. Research into different regions and into changes over time is important as well.

Researchers into the commemoration of the dead are presented time and again with a tricky challenge: the research materials have become dispersed, and sometimes their existence may even be unknown. The MeMO database therefore offers inventories with descriptions of objects and texts that fulfilled a function in memoria. The inventories cover the area that is currently the Netherlands in the time period until 1580.