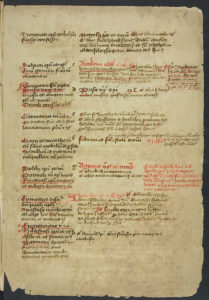 Register of memorial services (ca. 1435-1465), included in a martyrology of the Carthusian monastery Nieuwlicht near Utrecht. This page shows the week of 16-23 January, MeMO text carrier ID 429

Memorial registers, which are subdivided based on subject into

Narrative sources. The sources included are those that either had a function in the commemoration of the dead, or provide information on donation practices and memorial practices: 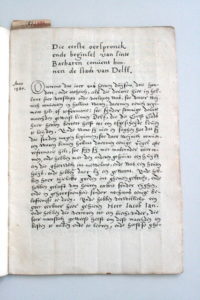 Chronicle of the St Barbara convent in Delft (second half 16th century). The chronicle was written by Jan Janszoon (rector from 1515 to 1543) and edited and supplemented by a successor, MeMO text carrier ID 173

Included are text carriers that have survived (at least partially) and were used in medieval institutions that were established in the area that is now the Netherlands, as well as editions of text carriers that have been lost, or whose current location is unknown. Not included are lists and editions that have the outward appearance of a memorial register, but that have been compiled by the editor on the basis of various individual documents. A number of these types of lists (especially of conventuals) were published by the end of the nineteenth century and in the first half of the twentieth century, but there are also lists known from previous centuries.

The starting point is the entire text carrier, because the complete body of texts can provide clues on the usage and functioning of the text carrier and its constituent parts. For this reason a table of contents has been included in the database for each text carrier. However, only the texts that had a memorial function have been described in detail.

Many text carriers have been changed over the course of the centuries, both physically and/or in terms of content throughout the period in which they were used, but also later, for instance due to conservation and restorations. These changes can be of serious consequence in tracing their usage and functions, and therefore if these changes are known, they have been described in the database.