3.2 Criteria for the inclusion of objects

Included in the MeMO database are descriptions of tomb monuments, floor slabs and memorial pieces that have survived (at least partially) and that originate from the medieval institutions located in the area that is currently the Netherlands. Note that a number of the objects in the database cannot be properly placed, because the institutions in which they originally functioned are unknown.

MeMO covers the period until 1580, the approximate date when, due to the Reformation, Catholicism was (temporarily) abolished as the official religion in large parts of the area that is now the Netherlands. Tomb monuments, floor slabs and memorial pieces could be placed either long before or long after the death of one or more of the individuals who were commemorated on the object. This is why a justification for the date of each object is provided. A date of death is just an indication for further research. 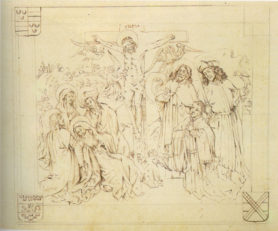 Fig. 7. Drawing of a lost Crucifixion with the devotional portrait of Dirk van Wassenaar. This provost and archdeacon of the Utrecht Janskerk was also parish priest of the Haarlem St. Bavokerk; its patron saint is depicted behind the kneeling figure of Dirk

It is quite possible that floor slabs, tomb monuments and memorial pieces in private collections and in depots of archaeological agencies and museums have never been catalogued nor published.